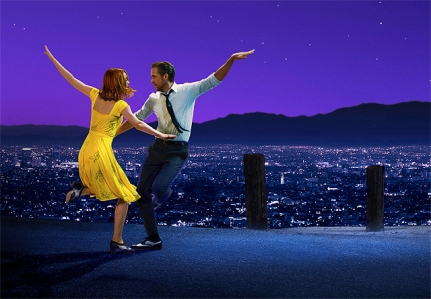 This article is about my particular experience with the 2016 film, La La Land, which was written and directed by Damien Chazelle and stars the wonderful Ryan Gosling and utterly amazing Emma Stone. Let me start by saying La La Land deserves the hype it’s gotten. It is, as many have said, a fitting and nearly-perfect tribute to the musicals of Hollywood’s Golden Age. It is well-written, beautifully shot, wonderfully directed, and brilliantly acted. The movie deserves the Golden Globes it received earlier this week. I imagine there are quite a number of Oscars in its future as well. My rating: 4.5 SHIELDS

If you just wanted to know if I liked this movie or not, there’s your answer. You can stop reading now and move on with your life. However, if you want to know how and why this movie turned me and my friends into cliches and put us so deep in our feelings that we literally (not literally as figuratively, but actually literally) screamed in the theater, you should continue. Be warned, though…

Ahead there be SPOILERS!

Okay, now that’s done, I can tell you that this movie took me on an emotional roller coaster that it has taken me days to fully recover from. First, you need to know that I absolutely adore the wonderful pairing that is Ryan Gosling and Emma Stone. They have amazing chemistry and I’ve immensely enjoyed every film they’ve done together. That includes 2011’s Crazy Stupid Love and 2013’s Gangster Squad. And yes, Emma and Ryan are big parts of what I found appealing about both films. I basically <heart> them so hard. 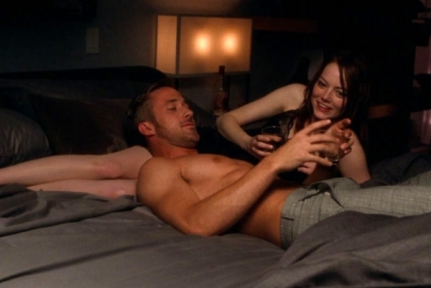 I don’t actually “ship” them, though. I get that Ryan is a happily married man (how lucky is Eva Mendez?) and Emma Stone has her own things going. I have absolutely no problems with their lack of romantic connection IRL. However, when they are on screen, I expect to see shmush-faced kisses and sexy skin time and happily ever after. Frankly, I felt like this movie was kind of a bitch for not giving it all to me.

So, here’s what happened… Every “Top 2016 Movies” list I looked at had this film on it. The accolades rolled in, then so did the awards. The movie swept the Golden Globes and I thought to myself, I really gotta see this film. I talked it over with a couple of my girls at work and we decided to head to the cinema that evening. We arrived with smuggled snacks in tow and found the perfect seats (middle middle, in case you were wondering). The movie began with a cheery song and dance number that neatly segued into Mia (Stone) and Sebastians’s (Gosling) first encounter, which was less a meet-cute than a road rage-induced spat. Following that, we start to get to know both characters as they travel through their day and head straight for their second encounter. This also is not a meet-cute. It’s just another disaster. So far, Sebastian has failed twice to give any real notice to the beautiful young woman that fate is tossing at him.

Frustrating, but okay. This is a musical and I’ve seen the previews, so I know they’re going to get it together sooner or later. At this point, I’m not worried. Their third encounter finally brings the cuteness and Sebastian pulls his head out of his anus long enough to see the stunning creature smiling at him. The friend directly to my left, whom we’ll call Tara, actually yelled at the screen, telling the characters, “You need to shmush your faces together! Just do it!” Eventually they do. Romance ensues. Yay! 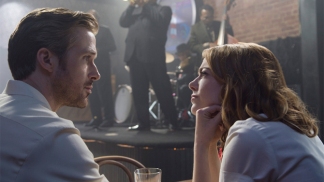 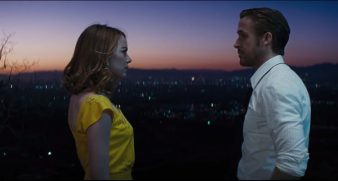 To make it even better, there is cheery singing and dancing throughout their courtship. So not only do we love both characters. Not only do we want to see them together. But our own bodies are wrapped up in their romance. The music has moved us. Their happiness has become our own happiness as we connected with their music and swayed along in our seats to the melodies. Everything is looking up.

Then, things start to go terribly, horribly wrong. Somehow, Sebastian’s head begins to slowly make its way back up his rectum. He does and says things that are just… wrong. At one point, he speaks to Mia with such harshness that the music in the film actually stops. My friends and I gasped in unison at the unfairness and meanness of the words. I found myself holding my breath afterward, waiting for his apology. It never came. Following that foolishness, Sebastian has to make a difficult choice about keeping an extremely important commitment to Mia or keeping a commitment to his work. He chooses incorrectly.

This time, my friend Tara is less polite than before. “Oh, he done f*cked up… a SECOND time!” This is said out loud for everyone in the theater to hear. (I should note at this point that Tara is not black. She’s a 5’4″ blonde white girl who weighs maybe a buck fifteen soaking wet. I mention it because I know you likely assumed she was black. It’s okay. No shade. But we both know you did. Anyway, back to the story…) Things get worse for our couple and everything crumbles. The relationship that we’ve become emotionally invested in seems to be over. Then it seems that it’s maybe not. Then it is? We are deep in our feelings at this point and speaking out loud so frequently that I lose track of how many times we’ve yelled, what we’ve said, and generally how big a nuisances we’ve made of ourselves. Then the film signals the final chapter of the story is upon us. But there is a surprise…

***Okay, seriously now, here are BIG SPOILERS. I’m about to discuss the end of this film. Now is your chance to stop reading and not know what happens.***

The tale has jumped ahead five years. Things have come full circle in the most satisfying way. And just when we expect to see the characters together or poised to get back together, Mia starts kissing some other guy pretty vigorously. I am shocked, appalled, and disgusted. I have no words. My other friend, whom we’ll call Annie, doesn’t have that problem. “Who the f*ck is that?!” she screams. Turns out the new guy is Mia’s husband and the cute little girl is their daughter.

I feel like I’ve been gut-punched. My dreams are dashed. My hopes are lost. There is no way they are going to have this character walk away from a fully-formed family to hook up with her hot, but slightly unstable, ex-boyfriend. To make matters worse, the characters encounter each other one more time and the movie shows a flashback that progresses into a “this is what would have happened if Sebastian hadn’t f*cked it all up” montage. We even get to see the cuteness that would have been Mia and Sebastian’s little child.

I gotta be real with you. That just made the whole thing worse! Don’t dash my dreams of these characters getting together just to show me what it would have looked like. That makes me sadder! The film ends with the characters giving each other small smiles and going back to their respective and completely separate lives. I was pissed!

Yes, the movie was amazingly executed. Yes, in retrospect and upon reflection, it actually makes sense for them not to be together because Sebastian is kind of an a-hole  and Mia is mostly wonderful. And now that I’m laying out the plot, I realize that the beginning of their story basically told us what the end would be. However, the point still remains that this film took my emotions and made them its bitch. 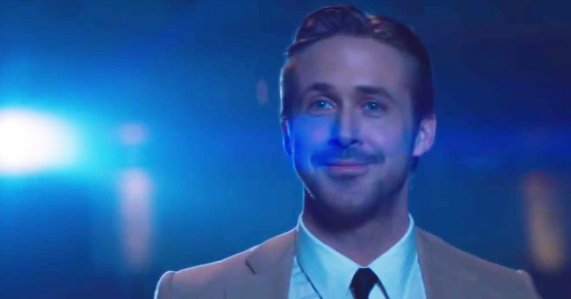 After viewing the film, I looked up the movie’s classification. Because I’m thinking it’s a musical comedy and the lack of their happy ending together means somebody broke the rules. The thing I discovered is that though the movie does list classifications of a comedy, romance, and musical, it is also classified as a drama. The first three suggest the happy ending I was expecting, but the last means that it doesn’t have to happen. Ugh!

This film took me on an emotional roller coaster that made me laugh and want to cry. At least twice I found I was holding my breath and just as many times I found I’d thrown my hands into the air and heard myself say, “I can’t even!” (For the record, the unspoken part of that sentence is, “handle this.”) My friends and I were reduced to cliches, yelling at the screen because we’d become so emotionally involved in the story. And honestly, it took days of thinking through the film and re-watching it in my mind to realize that their was any possible reason Mia and Sebastian shouldn’t be together.

If the goal of movies is to make us feel, then La La Land definitely did its job where I’m concerned. If the idea behind it all is to entertain, it managed that as well. However, if the point of the film is to give me what I want–which it clearly isn’t—the movie failed miserably. I doubt anyone associated with it really cares. After all, they have Golden Globes gracing their mantels and I’m just one random chick in Alabama.

I recommend you watch La La Land if you haven’t already. It really is quite a wonderfully executed film. Just don’t make my mistake. Don’t assume that Ryan and Emma on screen always means a happy ending. And don’t fall too hard for Mia and Sebastian as a couple. Because while they both get a happily ever after, it certainly isn’t together. And you’re going to have to be okay with that. Maybe one day, in the distant future, I will be. But today is not that day.

Have you seen La La Land? Did you enjoy it? What did you like and dislike about it? If you haven’t seen it yet, do you have plans to watch it? Whether you’ve seen it or not, let me know… who’s your favorite movie couple? And what couple do you think should have ended up together, but didn’t. Take to the comments and let me know.